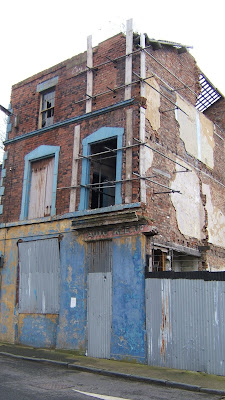 Our first De Quincey dérive on Saturday 22nd January took us past the above building which stands on the former North Shore - the "resounding shore" which was the destination of a walk by De Quincey on the Sunday May 1st 1803 and the inspiration for our dérive.

The above building on the corner of Vandries Street and Waterloo Road was called "Lascar House" and was the offices until 1971 of the Beldam Asbestos Company. The building has been in a state of dereliction for a number of years and partially collapsed in 2009.

The Bedlam Asbestos Company may have been using the building for a considerable time as I came across this snippet from the Rubber Journal:

In the photograph below you can see the name of Auto-Kleen is visible: 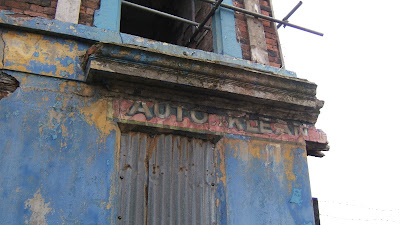 The Who's Who of Engineering 1921 has Directors : George Wm. Beldam and Cyril Asplan Beldam. Manufactures. — HP asbestos packings and jointings ; all kinds of packings.

Interestingly, in a the Dairy and ice cream industries directory 1954 has this entry:

That one did worry me - asbestos and ice cream!!

Why use the name Lascar House in both locations? Did they move up from Hounslow or was the office on Waterloo Road a subsidary? I thought Lascar may refer to the name for Eastern seamen but I am not too sure as I came across this description in a magazine called Fairplay in 1996: Beldam Lascarite Green Jointing Beldam Lascarite Reinforced Jointing. Therefore Lascar House may have nothing to do with the term for Eastern seamen but something to do with an asbestos product or did the term originate from the company's original premises? However, there is a certain irony using the name of "lascar" as the building is right opposite docks where many Eastern seamen sailed in and out of the port. 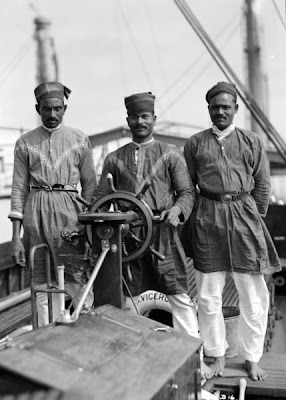 A lascar was a sailor or militiaman from the Indian subcontinent or other countries east of the Cape of Good Hope, employed on European ships from the 16th century until the beginning of the 20th century. The word comes from the Persian Lashkar, meaning military camp or army, and al-askar, the Arabic word for a guard or soldier. Wikipedia

I came across an interesting website dedicated to the "publication and exchange of information about the history of lascars. i.e. the forgotten Asian, African and other 'foreign' seamen serving on British ships" - sadly it was last updated in 2003.

I also came across a site with extracts from a book entitled The Merchant Seamen's War Sons Of Empire concerning seamen in the merchant navy during world war II. The extracts demonstrate the inherent racism in the ship owners and authorities to African, Indian and Chinese sailors during WW11:

'In September 1942, eighteen West Africans were jailed for one month after refusing to withdraw their demands for higher pay. Nine men, each from two ships, had been originally engaged in Lagos for what they believed to be a regular run between West Africa and the UK. But while in the UK they had found their ships being altered for use in a different trade and argued they should be paid higher wages accordingly. When their demands were rejected the men went on strike. They were found guilty by Liverpool magistrates of disobeying the masters' lawful commands and offered the option of paying a £6 fine each. The press reported the men as appearing to resent the decision of the magistrate and said they could not pay. On being asked by the clerk if they were willing to go to sea without persisting in this demand for higher wages the men replied with an emphatic 'No'. [The presiding magistrate] thereupon said, 'We are sorry to hear you adopt this attitude. . . The fine will be withdrawn and you must all go to prison for one month with hard labour.' Here is another extract:

'Private reports were more mixed. Major-General Gleadell, a passenger aboard the Llandaff Castle when she was sunk, wrote that he was 'eventually picked out [of the water] by Bil Dames, a big Liverpool negro and a first class man for the occasion' and that Dames had also pulled into the boat a 'Lt. Brigstocke, complete in white naval topee'. J.K. Gorrie, 3rd mate of the Athelking, was on watch when the ship came under fire from the German raider Atlantis.

He recalled that he was 'scared stiff' but seems to have been surprised that the West Indian helmsman defied stereotypical expectations by sticking to his post: 'One thing that sticks in my mind is that when he opened fire, we had a big West Indian called Bodin at the wheel and he just stayed there. We had steel flaps to let down over the wheelhouse windows and we dropped those down but this West Indian just stayed at the wheel.' 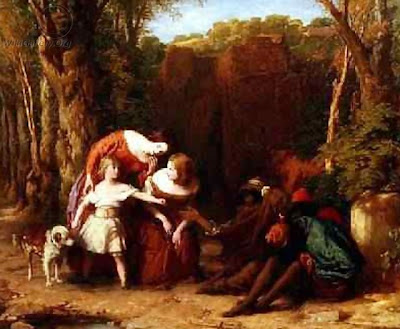 Returning to De Quincey, the above painting by William Mulready called Train Up A Child featuring Lascars is thought be some commentators to be based on De Quincey's dream of the Malay in his Confessions of An English Opium Eater. See High anxieties: cultural studies in addiction by Janet Farrell Brodie, Marc Redfield 2002.

I am currently reading a book entitled Thomas Burke's Dark Chinoiserie Limehouse Nights and the Queer Spell of Chinatown by Anne Veronica Witchard. This books details De Quincey's rabid sinophobia and how his reading is permeated with lurid racism as can be seen below in an extract from his essay 'Murder As One Of The Fine Arts':

"Every third man at least might be set down as a foreigner. Lascars, Chinese, Moors, Negroes, were met at every step. And, apart from the manifold ruffianism shrouded impenetrably under the mixed hats and turbans of men whose past was untraceable to any European eye, it is well known that the the navy (especially, in time of war, the commercial navy) of Christendom is the sure receptacle of all the murderers and ruffians whose crimes have given them a motive for withdrawing themselves for a season from the public eye."

I will return to De Quincey's racism, sinophobia and Chinoiserie after a dérive I have planned for later this year to be called "De Quincey Goes to Chinatown"

The original purpose of "Lascar House" was a pub called "The Anglo-American Hotel" which symbolises both the connection of Liverpool to the USA and perhaps the more friendly welcome the port gave to white cousins? 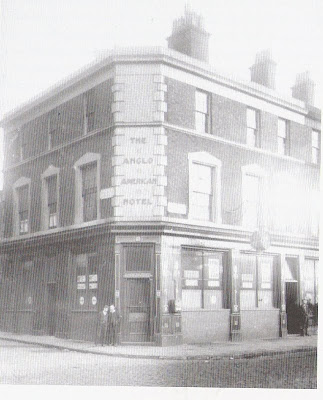 Posted by Keeping Soul Alive at 13:40