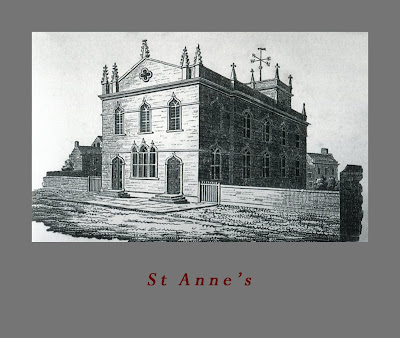 Went to St. Ann's;— heard an ass preach;— went to the woodlands after return to Everton and thence to the resounding shore, "To worship God amongst His handy-works."

St Anne's Church (note De Quincey mis-spells the name)was about half a mile from where he was staying in Everton in 1803. He would have walked out of the village down what is now Everton Brow then called Causeway Lane or Loggerheads Lane after the tavern at the bottom of the lane and into Richmond Row which joined St Anne's Street as can be seen on the 1848-64 map below.

The Reverend William Blundell was the minister who he called an "ass". I will return to the minister in a later post.

Here are several descriptions of the church.

"St Ann's Church stands at the North end of St Anne's Street. It was built by two private gentlemen about the year 1770. It was a small neat structure of brick and stone, chiefly of the Gothic sty;e. At the North end is a plain brick tower, on each angle there is a pinnacle... The inside is well pewed in two aisles; the galleries are supported on each by slender cast-iron columns. The altar ornaments are neat, and the window is of glass richly executed. The church is remarkable for being in a north and south direction" The Stranger in Liverpool 1812

St. Anne's Richmond was opened for divine service on 25th October 1772. The building had been started earlier and had been completed under the terms of 'An Act for completing a building intended for a new Church or Chapel at Richmond near Everton...' 1772. The church was built at the expense of Thomas and Richard Dobb, cabinetmakers, of Williamson Square and a Henry North, fruit merchant, Dale Street. The church was built on land belonging to them. They had noted that there was a need for a church 'in some convenient part near to Everton due to the increasing population'. The church stood in what later became known as St. Anne Street. According to an article in 'Topographical News cuttings: St. Anne's Church, St. Anne Street' [Liverpool Record Office] for many years 'the original St. Anne's held the most aristocratic congregation in the town and the pews at one time were sold for sixty and seventy guineas to some of the most noted families of the period'. There were no free pews in the church, the pew rents and money given for burial plots in the churchyard having largely made up the incumbent's income.

In time the 'character of the locality deteriorated'. The rich moved away, the poor owned no pews and by the middle of the 19th century the church had fallen into neglect and disuse. 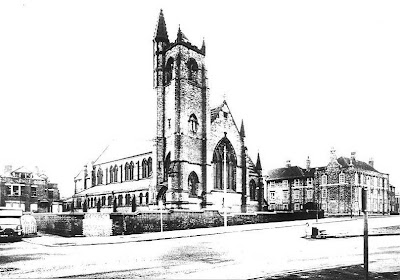 In 1865 the Liverpool Construction Act was passed on 26 May 1865. Under the terms of this act, St. Anne's Street was to be extended into Cazneau Street. To facilitate this, the Act provided for the demolition of St. Anne's Church but its terms prevented the Corporation from pulling down St. Anne's before erecting a new church. The Corporation duly built the new church of St. Anne's at the corner of St. Anne Street and Great Richmond Street and the consecration of the new building took place on 16th November 1871. GEN UKI

The location of the original church can be seen on the map below. (Click to enlarge) 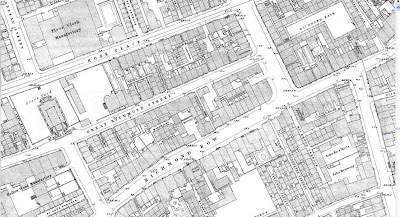 Sir James Allanson Picton was critical of the design of the church:

It was originally plain red brick, with stone jambs to the windows and doors, supporting ogee arches, intended, it is presumed, to indicate the Gothic or Pointed style of architecture. At the north end was a plain square brick tower. Internally it was a simple parallelogram, with galleries on three sides, and a recess for the altar at the south end. Any attempt at criticism on such a piece of composition would be superfluous. It is worthy of notice on another account. It was one of the very few public buildings in Liverpool which terminated a vista. In former times, standing as it did at the extremity of a long, straight avenue, on a slightly rising eminence, and shadowed by trees, the perspective was striking when seen from a distance, at which the paltry detail was lost in the general outline. Our English towns are for the most part deficient in effects of this kind. Paris abounds with them. Edinburgh possesses a noble avenue in its George Street, terminated by the Melville Monument at one end, and by St. George's Church at the other.

On the principle of gilding refined gold, the dingy brickwork of St. Anne's Church was ultimately covered with a coat of compo, which brought out with better effect its incarnate ugliness. Memorials of Liverpool, Historical and Topographical 1873

(St Anne's) .... was the most aristocratic church in town. The pews at one time sold for sixty and seventy guineas each" The Streets of Liverpool 1869

We passed the site of both churches on our first De Quincey dérive. Below is a photograph taken on the dérive of the site: 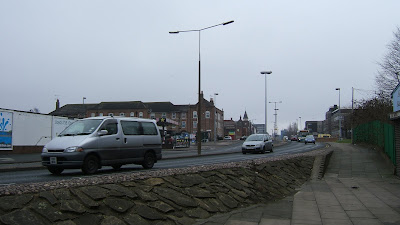 The photograph is taken roughly from where the first church stood looking back up St Anne's Street and the second church was on the site of the car wash on left of the photo.
Posted by Keeping Soul Alive at 02:08