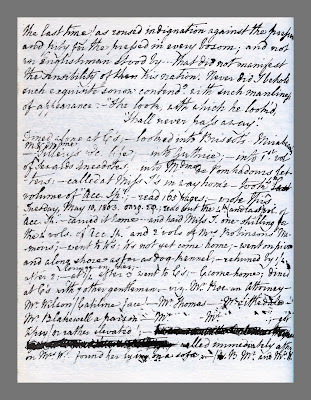 When I obtained a 1927 copy of De Quincey's 1803 Diary, I was intrigued as to the history of the diary. The first thing that I discovered was that the original diary resided in the Liverpool Record Office which made me smile to think that De Quincey would have passed the site of the Library on his way into Liverpool in 1803 never guessing that his "secret" diary would end up being printed.

The manuscript diary, listed at 920 MD 424/1 below, was bequeathed to this library by the Rev. C.H. Steel and was received here on 19th September 1951. According to the Libraries, Museums and Arts Committee Minute Book, Jun. 1948 - Nov. 1951 (352 MIN/LIB 1/33), p. 740, the following was noted at a meeting of the Libraries and Reading Rooms Sub-Committee on 14th September 1951 "Bequest: Rev. C.H. Steel, Deceased... The City Librarian submits a letter dated the 6th of July from Messrs. Belk and Smith, solicitors, of Albert Road, Middlesborough, stating that the Rev. C.H. Steel had bequeathed to the Liverpool Public Libraries the original MSS diary of Thomas de Quincey written whilst staying with Mrs. Best in Everton during the spring of 1803 ..." It was stated that the reference library already held a copy of A Diary of Thomas de Quincey, 1803:... reproduced in replica as well as in print from the original manuscript in the possession of the Reverend C.H. Steel..., edited by Horace Eaton, Professor of English at Syracuse University, New York [1927] and it was... Resolved that the bequest be accepted with thanks". On coming to this library the diary was placed in the Hornby Library but in view of its local connections was transferred to the Record Office in January 1974. 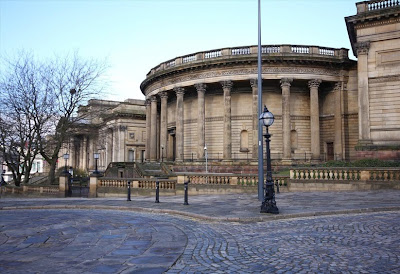 The Rev. Charles Henry Steel is last listed in the Crockford's Clerical Directory for 1949 - 1950, p. 1128, at an address in Middlesborough. He had been educated at Keble College, Oxford, ordained in 1895 and apart from periods as a naval chaplain, 1916 - 1919 and in Coldstream, Berwickshire, 1919 - 1924, all of his working life appears to have been spent in Yorkshire, much of it in or near Middlesborough.

Professor Eaton in his Introduction to the Diary... (see above), p. 1, described the Rev. C.H. Steel as being "... formerly of Carlisle". He died in Middlesborough on 5th April 1951 aged 83 years (according to details supplied by the staff of the Reference Library, Central Library, Middlesborough).

It is not clear when the De Quincey diary came into the possession of the Steel family. If Charles Henry Steel was aged 83 years at the time of his death in 1951, he would have been born in 1867 or early in 1868. Steel himself wrote in a Foreword to the Diary... [1927], p. ix, "This diary written by Thomas de Quincey at the age of seventeen, was given to my father about sixty years ago" [i.e. c. 1867] "by an old friend in the Lake District. Beyond this nothing is known of its history". A slip of paper pasted on to the inside front cover of the volume reads "Robert Steel from J. Martindale Scott of Penrith by Jos Wilkinson Esq., Bowscale". According to Eaton, p. 2, "All that Mr. Steel knows is that somewhere about 1860" [i.e. some years prior to Charles Henry Steel's birth] "his father Robert Steel, Esq., returned one day from an expedition of hunting or fishing in the Lake District with the treasure in his pocket ..."

However, Steel himself wrote an account in A De Quincey Relic in The Bookman's Journal and Print Collector, 1 Oct. 1920, Vol. 2, No. 49, p. 365 (ref. Rq 805 B00) which makes it clear that he himself remembered this event which must have taken place at some time in the 1870's 'Do you see' said my father as he boisterously entered the parlour where we were hungering for tea... ' do you see this square old yellow book I toss in the air' (doing so) 'and catch again' - the plate of bread and butter really caught it ...', 'and twirl about' By the crumpled yellow covers'?' 'Is that by Shakespeare, papa? said I, meaning...; the quotation. Being (in the early seventies) about six years old, had... a strong conviction I that... blank verse... came originally from Stratford ...". He continued What was the story of the unattractive looking little book? It had been given to my father he said, by an acquaintance in the course of his travels [in the Lake District]... The volume remained in the Steel family's possession... reticent and almost forgotten in an old clock... [which] was the repository of a varied and unclassified collection of autographs, scrapbooks and other similar curiosities ..." On his own account in both the Bookman's Journal article and the Foreword to the Diary, 'the Rev. C.H. Steel twice offered The volume for sale at Sotheby's, in 1905 and in 1919 but on neither occasion was the reserve price reached,; though he... was not inconsolable when the reserve price proved too high and my father's find returned to its corner in the old clock. At some time during the 1920's, the Rev. C.H. Steel met or contacted Professor Eaton... who was engaged in researches concerned with De Quincey and together [they] took steps for publication... of the diary, (see Steel's Foreword to the Diary..., p. ix). 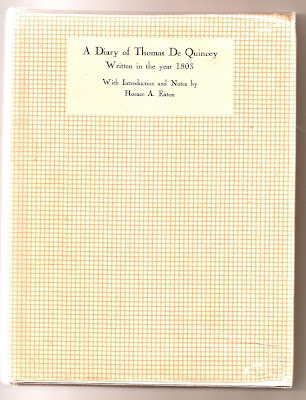 Professor Eaton published a limited edition of 1500 copies of the Diary... in 1927. This publication dedicated to De Quincey's grand-daughters, Florence and Margaret Bairdsmith, includes a foreword by the Rev. C.H. Steel, an introduction by Professor Eaton, a facsimile reproduction of the diary, a printed transcript of it and detailed notes on the text. 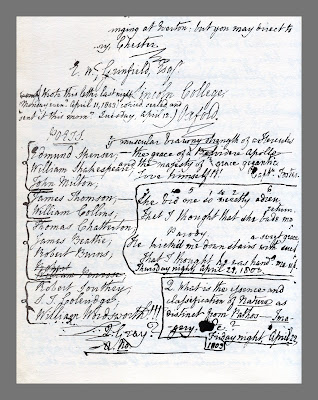 Posted by Keeping Soul Alive at 04:07