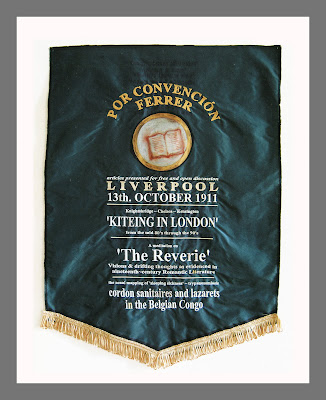 My initial introduction to De Quincey was reading his Confessions of An English Opium Eater in 1971. I had never thought of relating De Quincey to my work until I went to see David Jacques’s film Por Convención Ferrer at the Bluecoat in 2008. In the post film chat, David talked about his inclusion of De Quincey’s vision of Liverpool in his film.

I often fell into these reveries upon taking opium ; and more than once it has happened to me, on a summer night, when I have been at an open window, in a room from which I could overlook the sea at a mile below me, and could command a view of the great town of L , at about the same distance, that I have sat, from sun-set to sun-rise, motionless, and without wishing to move.

I shall be charged with mysticism, Behmenism, quietism, &c but that shall not alarm me. Sir H. Vane, the younger, was one of our wisest men ; and let my readers see if he, in his philosophical works, be half as unmystical as I am. I say, then, that it has often struck me that the scene itself was somewhat typical of what took place in such a reverie. The town of L represented the earth, with its sorrows and its graves left behind, yet not out of sight, nor wholly forgotten. The ocean, in everlasting but gentle agitation, and brooded oyer by a dove-like calm, might not unfitly typify the mind and the mood which then swayed it. For it seemed to me as if then first I stood at a distance, and aloof from the uproar of life ; as if the tumult, the fever, and the strife, were suspended ; a respite granted from the secret burthens of the heart ; a sabbath of repose ; a resting from human labours. Here were the hopes which blossom in the paths of life, reconciled with the peace which is in the grave ; motions of the intellect as unwearied as the heavens, yet for all anxieties a halcyon calm : a tranquillity that seemed no product of inertia, but as if resulting from mighty and equal antagonisms ; infinite activities, infinite repose. Confessions Of An English Opium Eater 1821

De Quincey’s vision was based on his time in Everton in 1805 and included in his Confessions. I had completely forgotten about De Quincey’s time in Liverpool. I added it to my list of writers who had visited/lived in Liverpool for a future project.

Below you can see David's excellent film Por Convención Ferrer in 3 parts via You Tube:

A book was published to coincide with the release of the film:

“In the years leading up to the First World War a small though significant network of Anarcho-syndicalist activists in downtown Liverpool instigated an annual conference-cum-discussion group titled ‘Por Convención Ferrer’.

Contributions were broad ranging in their subject matter and relied upon the involvement of fictitious characters, spectral appearances and dream-like transcendences to places located either in the past or the future”.

After evidencing an archive of embroidered silk pennants commemorating each conference from 1910 through to 1918, an un-named narrator guides us through his research materials exploring the diverse content of some 27 presentations.

Covering an array of matters broaching time, space and place, subjects encountered along the way range from the ‘Scotland Road Free School’, to ‘the zonal mapping of ‘Sleeping sickness’ in the Belgian Congo’, Thomas De Quincey’s residing at Everton, and a Critical Mass bike ride through Manchester City Centre. Buy Por Convención Ferrer

David's reference to De Quincey in his film has inspired me to research De Quincey's time in Everton.

Below is a photograph of a recent dérive around the Squaremile mapping long lost pubs and treading in De Quincey's footsteps; L to R Cathy Butterworth performance artist, Colin, Bryan Biggs Artistic Director The Bluecoat and David Jacques artist. 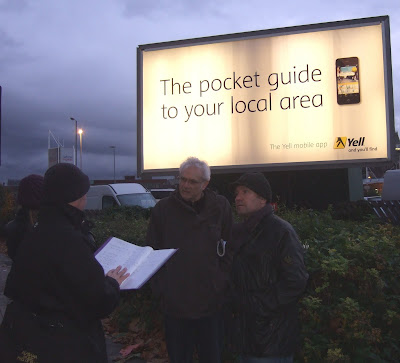 Posted by Keeping Soul Alive at 07:12