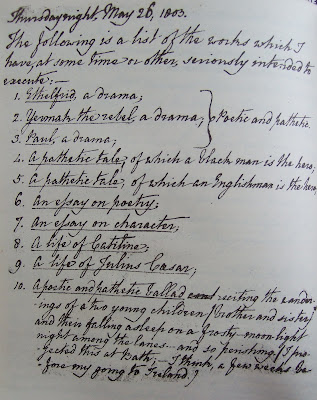 I am always fascinated by writer's plans for their work even if they don't produce the final article. We can sometimes learn a lot about what interested writers by these kinds of plans or lists. De Quincey was an aspiring writer in 1803 and his diary reflects his plans for his future writing:

"The following is a list of the works which I have, at some time or other, seriously intended to execute:-

1. Ethelfrid, a drama (poetic and pathetic)
2. Yermack, the rebel, a drama; (poetic and pathetic)
3. Paul a drama;
4. A pathetic tale, of which a black man is the hero;
5. A pathetic tale of which an Englishman is the hero;
6. An essay on poetry;
7. An essay on character;
8. A life of Catiline;
9. A life of Julius Caesar;
10. A poetic and pathetic ballad reciting the wanderings of two young children (brother and sister) and their falling asleep on a frosty - moonlight night among the lanes...and so perishing. (I projected this at Bath; I think, a few weeks before my going to Ireland.)
11. A pathetic poem describing the emotions (strange an wild) of a man dying on a rock in the sea...which he had swum to from a shipwreck...within sight of his native cottage and the paternal hills.
12. An ode in which two angels or spirits were to meet in the middle of the Atlantic.
I have sometimes thought too, though with less firmness of determination than on the preceding, that I would write-

1. An essay on pathos, as a counterpoint to No 6;
2. An essay on French and English Character, as a sequel and illustration of No. 7;
3. Many different travels and voyages.
I have besides always intended of course that poems should form the corner-stones of my fame;- but I not (at this moment) recollect any subjects that I have chosen for my poetical efforts..except those already mentioned. Between 11 and 12 o'clock"

I will be posting in more detail of some of the above at a later date.
Posted by Keeping Soul Alive at 06:44

Email ThisBlogThis!Share to TwitterShare to FacebookShare to Pinterest
Labels: De Quincey's Plan of Works to "Execute" in 1803