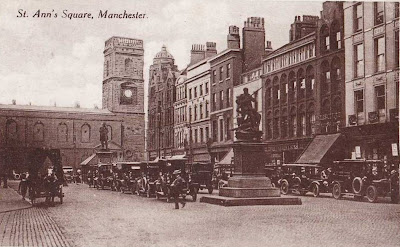 I had completely forgotten that De Quincey was baptised in St Ann's Church in Manchester until I read it again this afternoon. The coincidence between his attending St Anne's Church in Liverpool while in Everton in 1803 and being baptised in a church of the same name in 1785.

MANCHESTER SJ8398SE ST ANN STREET 698-1/27/384 (South side) 25/02/52 Church of St Ann GV I Church. 1709-12 (traditionally said to have been designed by Sir Chistopher Wren or one of his pupils); restored 1886-91 by Alfred Waterhouse. Sandstone ashlar, hipped slate roof. Classical style. Nave with east apse and west tower. The 2-storey 6-bay nave has coupled pilasters to both levels, the lower being fluted Corinthian and the upper plain, both with cornices, each bay containing large round-headed windows with keystones, and the westernmost a square headed doorway in a large pedimented tetrastyle Corinthian doorcase with fluted columns; and a pilastered parapet (formerly with urns). The semi-circular full-height apse has tall fluted Corinthian pilasters, a full entablature with carved emblems on the frieze, a very prominent cornice, and large round-headed windows with panelled aprons, moulded imposts and enriched keystones. The square west tower has 4 stages divided by string courses and a mid-height cornice, rusticated clasping corner pilasters to the lower half, a Tuscan pilaster west doorway, coupled round-headed lancets to the 2nd stage, an oculus in a blank arch to the 3rd stage (and clock-faces under segmental pediments in the north and south sides), a belfry stage with coupled fluted Corinthian pilasters framing round-headed 3-light louvred belfry windows with keystones, and a moulded cornice and balustraded parapet (originally surrounding a 3-stage cupola). Interior: galleries on 3 sides, supported by stout Tuscan columns (replacing square pillars), and with upper arcades on original slender Tuscan columns; most furnishings dating from C19 restoration, including choir in nave, but fragments of original pulpit and communion rail survive. Stained glass by Frederick Shields. History: second oldest church in Manchester, built as part of early C18 development of St Ann's Square; formerly had strong Whig and Anti-Jacobite connections; John Wesley preached here 1733 and 1738, Thomas De Quincey was baptised here 1785. English Heritage
Posted by Keeping Soul Alive at 07:59