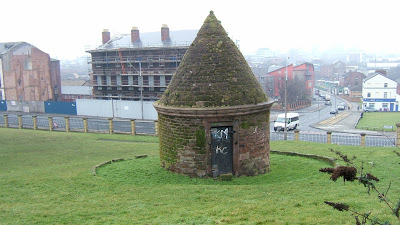 Our first De Quincey inspired dérive took us past the only feature in Everton which De Quincey would have been familiar to him in his various stays in the village between 1801 and 1808.

It was built in 1787, and was used to incarcerate wrong-doers until they could be hauled before the magistrate the following morning. 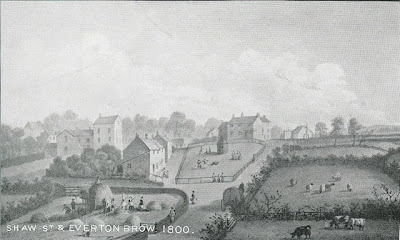 An early print of Everton Brow by Liverpool artist Herdman in 1800 shows the small round house with a conical roof in the middle of the penfold (cattle enclosure) which had been constructed to incarcerate drunks and deviants for the night.

Also going by the nicknames "Stewbum's Palace" or the "Stone Jug" in its day, there is a display about the lock-up in the Liverpool Museum. 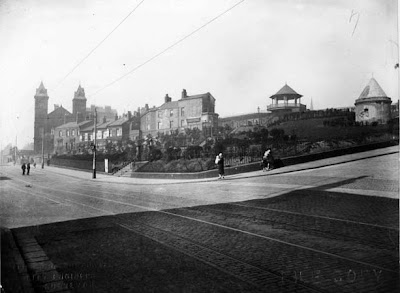 Used primarily these days by council workmen to store their tools, the tower itself has fallen into disrepair recently but in May 1997, then-chairman Peter Johnson announced a plan to spend £15,000 on renovating what is one of Everton FC's most enduring symbols. In 2003, a plaque was added to the site stating its importance to Everton Football Club Wikipedia

Lock ups in England and Wales

Village lock-ups are historic buildings that were used for the temporary detention of people in rural parts of England and Wales. They were often used for the confinement of drunks who were usually released the next day or to hold people being brought before the local magistrate. A typical village lock-up is a small structure with a single door and a narrow slit window or opening. Most lock-ups feature a dome or spire shaped roof and are commonly built from brick, large stones or timber. The village lock-up can either be round or polygonal in plan and minor variations in design, materials and appearance do occur although they were all built to perform the same function. Village lock-ups have acquired a range of local nicknames including blind-house, bone-house, bridewell, cage, jug, kitty, lobby, guard-house, round-house, tower and watch-house. Wikipedia

Here are extracts from Robert Syers's book The History of Everton1830: 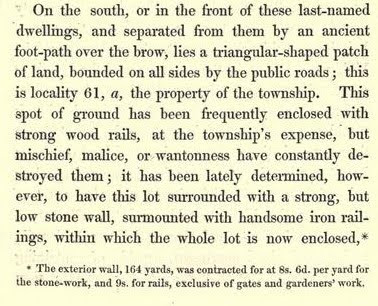 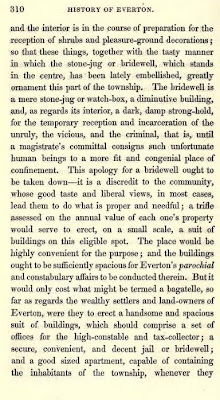 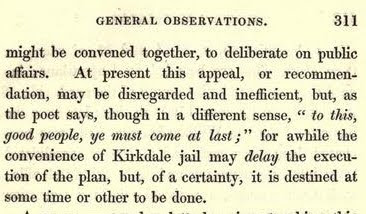 One thing that struck me whilst reading the 1803 Diary was that De Quincey and his friends where wandering around Liverpool and Everton late at night. This freedom of movement seems to go against our 21st Century perception that it might have been highly dangerous to walk around at night in the early 1800s's and begs the question whether they were protected by servants or were they armed?

I did come across the mention of crime in Syer's book: 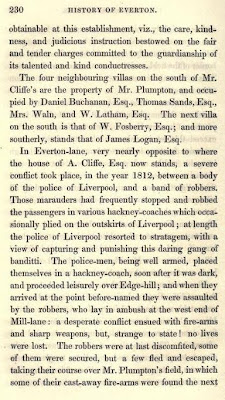 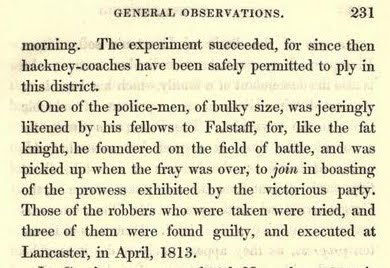 Posted by Keeping Soul Alive at 03:58