Sophia Lee The Recess; or a Tale of Other Times 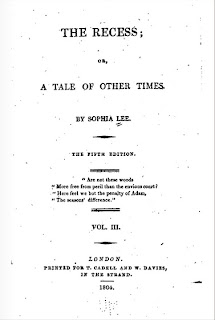 Sophia Lee's The Recess; or a Tale of Other Times was published in three volumes in London between 1783 and 1786. The novel appeared in five editions before 1805, and was translated into German under the title Ruinen, and into French. Its inspiration was clearly the novel Cleveland of the Abbe Prevost. ( Horace Eaton Notes to The Diary of Thomas De Quincey 1927). The Recess "can with justice be called the first roman noir, since it was in point of time and influence the forerunner of a large number of more or less similar narratives" (Dr. J.R. Foster 1927 as quoted by Horace Eaton).

The Recess can also be regarded as a formative work of the original Gothic, echoing and pre-dating themes from other contemporary Gothic writers. From this work, Italian writer Carlo Federici wrote the play Il paggio di Leicester (Leicester's Page) and, in turn, that became the source of Elisabetta, regina d'Inghilterra, (Elizabeth, Queen of England) the 1812 opera by Gioachino Rossini, the libretto of which was written by Giovanni Schmidt. Read more on Wikipedia

Sophia Lee was the daughter of John Lee (died 1781), actor and theatrical manager, and was born in London. Her first piece, The Chapter of Accidents, a three-act opera based on Denis Diderot's Le père de famille, was produced by George Colman the Elder at the Haymarket Theatre on 5 August 1780 and was an immediate success. 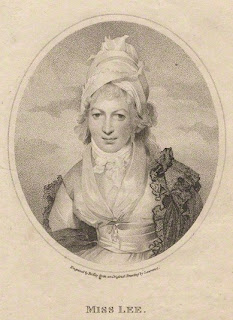 When her father died in 1781, Lee spent the proceeds of the opera on establishing a school at Bath, where she made a home for her sisters Anne and Harriet. Her novel The Recess, or a Tale of other Times (1783) was a historical romance; and the play Almeyda, Queen of Grenada (1796) was a long tragedy in blank verse, which opened at Drury Lane on 20 April 1796 but ran for only four nights.

With her sister Harriet Lee she wrote a series of Canterbury Tales (1797). Other works included The Life of a Lover (1804) and Ormond; or the Debauchee (1810). She died at her house near Clifton, Bristol on 13 March 1824. Read more on Wikipedia
Posted by Keeping Soul Alive at 02:23